On Friday 7 September, Bill Ramsay and Ron Hand assisted Janet Hand set up the display for the Yarra Yarra Plant Expo in the Eltham Community Centre. 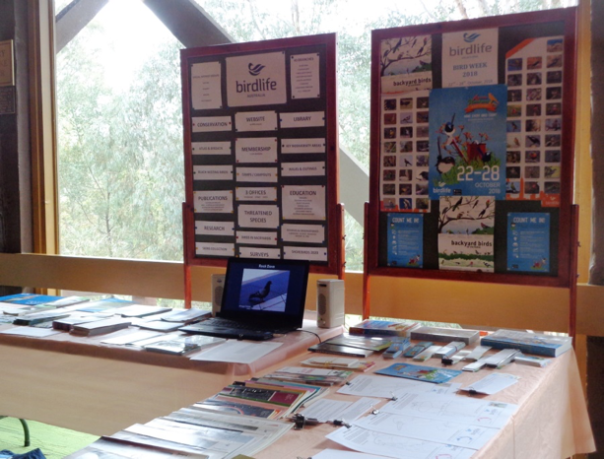 During the following weekend on Saturday and Sunday 8 and 9 September, hundreds of people visited the Yarra Yarra Australian Plant Expo at Eltham. Five hundred and fifty people came through the doors on Saturday and a few less on Sunday. Over the weekend Janet Hand was assisted by Daphne Hards, Scot Sharman, Pat Bingham, Sally Heeps, Susan Bailey and Peter Bennet. Many interesting discussions were held and their bird questions answered. Thanks to everyone who helped.

On Monday 10 September, Janet Hand gave a PowerPoint presentation to the East Doncaster Women’s Group in Donvale. The topic was “Backyard birds of Manningham”. With this being a smaller group it was a very interactive presentation with questions being answered as it progressed.

The U3A Hawthorn Birdwalk was held on Friday 21 September at the Banyule Flats Reserve in Viewbank. Fourteen people attended and 37 species were seen and/or heard. Two Pink-eared Ducks were on the swamp, taking particular interest in one of the nest boxes so maybe they’ll breed there. Two Tawny Frogmouths on nests were also found. Other enjoyable sightings were of Fan-tailed Cuckoo, Grey Shrike-thrush and pairs of Red-rumped Parrots. Pat Bingham led this outing. Thanks Pat.

On Wednesday 26September, Janet Hand made her annual visit to Mercy Place in Boronia. Mercy Place is a member group of BirdLife Australia. Janet gave her PowerPoint presentation on her trip across Arnhem Land last year and her follow on journey to Alice Springs and Ayres Rock. The ladies were fascinated by the Field of Lights photographs and how they worked.

The Nunawading Library is holding a display for the month of October with four display cases being used to showcase BirdLife Australia and various aspects of its work.

The largest case is promoting the upcoming Bird Week and the Aussie Bird Count which runs from 22 to 28 October. Please get involved this year and submit a minimum of one 20 minute count. BirdLife Melbourne’s October activities are also listed to show what a wide range of activities we run. Janet Hand set up this display on 29 September and it will be there until late October, so pop in for a look.