A very successful Birds in Schools Program has continued this month. Both Sally Heeps and Bill Ramsay have been to both Cornish College on 10 October and Wooranna Park Primary School on 17 October.  I thank them for their contributions to these programs.

On Sunday 13 October, Graeme Hosken led another successful bird walk around Wilson Botanic Park in Berwick organised by The Friends of Wilson Botanic Park.  The day was fine, cool and with no wind. Fourteen people attended the two hour walk with 21 species recorded.  Species numbers now average 25 over the 18 visits since 2004. The records now show 87 species found there over that period – not bad for a park now in a suburban environment. Thank you Graeme.

The U3A Hawthorn Birdwalk, led by Pat Bingham, was around Banyule Wetlands on Friday, 18 October. Thirteen participants recorded 35 species. Lots of breeding – including three frogmouth nests (one with one young), Eastern Swamphen with one young, Buff-banded Rail with three young, and countless Noisy Miner families.  On the swamp they also had a pair of Pink-eared Ducks (sadly driven out of the nest boxes this year by aggressive Silver Gulls) and a couple of Cattle Egret in partial breeding plumage.

The Blackburn Creeklands Spring Bird Survey was held early on Saturday morning, 19 October.  31 people (a mixture of adults and a good number of eagle-eyed children) split into two groups led by Ian Moodie and Pat Bingham. They headed off in opposite directions, returned for morning tea and combined their bird lists into one, with a total of 29 species.  Highlights were four Frogmouth nests (but no young seen), Mudlarks incubating, Grey Butcherbirds and Kookaburras feeding young, and both Chestnut Teal and Pacific Black Duck with broods of small ducklings on the creek.  We  also recorded Gang-Gang Cockatoos, Little and Long-billed Corellas, Galahs, King Parrots and both Eastern and Crimson Rosellas – a good number of which may compete for breeding in the many excellent tree hollows along the creek.

On Sunday 27 October 2019 we held our 21st Breakfast with the Birds at Banyule in partnership with the Banyule City Council.  This year we made a small charge to attend after more than half of the people booked in 2018 failed to turn up.  We had 80 people present out of the 96 who booked. These were split up into ten walking groups who walked the Banyule Flats and Warringal areas for two hours.  Upon their return the Council supplied a beautiful sit-down breakfast.  A bird call totalled 67 species with two new ones being added this year.  Gang-gang Cockatoos and a Leaden Flycatcher.  This makes a total of 126 species in Banyule on this day since records began in 2001 and 68 in the Warringal area since we started recording there in 2011.  I must thank the Banyule City Council for the wonderful spread of food, Jim Mead, their Environmental Sustainability Education Officer and his helpers (Alice, Micky and Rob in the kitchen) and John and Meg who helped with telescopes at the wetlands.  I must also thank my helpers Susan and Kevin Bailey, Peter Bennet, Pat Bingham, Alan Crawford, Pete Dynes, Lyn and Geoff Easton, Meg Houghton, Margaret Lo, Bill Ramsay and Sonja Ross.  Also thank you Daphne Hards who assisted with a telescope at the wetlands and Anthea Fleming for her information on the Warringal Conservation Group.  Another very successful day.  Thank you everyone. 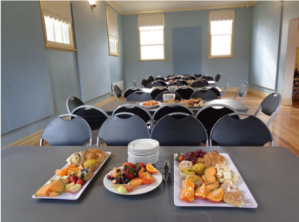