Twenty-three people started walking in misty showers of rain. These soon eased and patches of blue started appearing. Around the car park and near the picnic shelter of the “dragonfly” structure the dominant birds were, unsurprisingly, Noisy Miners and Australian Magpies keeping their attention on the possibility of picnic scraps.

A brief walk along the dragonfly’s tail allowed those who had not visited the park before to appreciate its size and layout and to turn binoculars towards the various lakes. The reed-fringed inlet of the main lake seemed only to host a Eurasian Coot and a Dusky Moorhen but as we crossed the small bridge we heard Australian Reed-Warblers calling and a couple were glimpsed by fortunate watchers.

Walking toward the lake we passed by a pair of Australian Wood Duck with 4 “teenaged” young, all well habituated to humans walking near. The walk along the western side of the main lake did not yield many new species though Superb Fairy-wren and Red-browed Firetail were much admired, especially the former with an active blue male and brown female. The high mournful whistles of Little Grassbird proved challenging for many to hear as we passed close to another reed bed. The large untidy nest of a Little Wattlebird was noted in a tree fork in the north-west of the park.

Birds were fewer on the southern side of the park though House Sparrow was added near the horse paddock of the harness club. A relaxed lunch was enjoyed after we returned to the “dragonfly” before we headed off to the western lakes.

This is usually a rewarding area and today did not disappoint. Swans were not seen but Hardhead and Grey and Chestnut Teal were added here. One highlight was the Latham’s Snipe which flushed briefly. An Australian Pelican flew over, very high, while a Nankeen Kestrel hovered far below it.

A Hoary-headed Grebe seemed to be alone but the shape of the small lakes and the vegetation around the edges meant counting birds was challenging. Many considered the highlight of the day was the pair of Freckled Ducks roosting quietly at the reeds’ edge.

Back to the car park and bird call where the total was 46 species, a very creditable total for a small created suburban site with a history as a sand quarry and the practical function as a water purification zone.

On Wednesday 13 February, Pat Bingham gave a talk entitled “Early Birds” to the Deepdene U3A. Twenty-two people attended. The talk was all about early European explorers’ records (c. 1600-1800) of their encounters with Australian birds. Some of these were apparently similar to those they were familiar with and so they were called robins, wrens, magpies and the like (but, in reality, were from biologically quite different families). Others were confusingly ‘mixtures’ like the Anomalous Hornbill, the New Holland Bird of Paradise and the Slender-billed Merops.

On Friday 15 February, U3A Hawthorn began their 2019 monthly bird walks with Pat Bingham. There were 19 attendees including 8 newcomers this year. The bird walk was around the Sinclair Street Wetlands in Glen Iris. Twenty one species were seen including Crested Pigeon, Little Black Cormorant, Masked Lapwing and a feather from an adult Nankeen Night-heron, though sadly, this year we didn’t actually see the bird itself.

On Friday 15 March, bird walk for U3A Hawthorn members was with Pat Bingham to Karkarook Park. It was a dull, cool morning and because of our poor summer rain, the water level in the wetlands was very low. 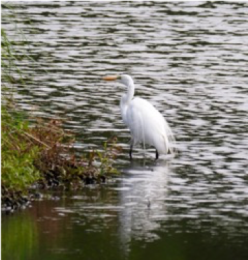 Fourteen members attended, with 33 species seen, of which the best were an Eastern Great Egret with lovely breeding plumes, a single Black-winged Stilt, a Hoary-headed Grebe carrying a stripy youngster on its back, and several noisy White-plumed Honeyeaters. Sue Wilson has kindly supplied the photographs in this article. 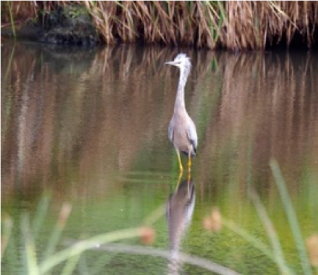 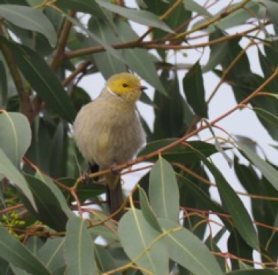 The Doncaster Valley Probus Club, which meets in Doncaster East Invited Janet Hand to talk about the local birds found around Manningham. This is a new club and about 45 members were present on Thursday 21 March. Questions were raised about the large numbers of corellas (Long-billed) in the area at the moment. 80 were seen in one flock earlier in the month.

Thank you Pat and Sue for your contributions.

The Autumn Survey at Blackburn Creeklands was held on Saturday 14 April, which was very windy and dull, but the 27 participants, including visitors from South Australia, Holland and China, enjoyed the 27 species they found. Everyone had superb views of Gang-gang Cockatoos, feeding on gumn uts, squabbling over perches and trying to get away from a very persistent youngster who wanted to be fed. Other Autumn visitors like King Parrots and Grey Fantails were good to see but the resident Tawny Frogmouths, Brown Thornbills and White-browed Scrubwrens were rather hard to find. 27 species is a low number for the survey (now in its 7thyear) but the dry conditions and the wind on the day may have contributed to this rather poor result.

This survey was led by Pat Bingham and Ian Moodie. Pat also led the Karkarook walk (below).

The U3A Hawthorn outing was on Friday 20 April. There were 14 attendees including six newcomers to this programme. There was bright sunshine in Melbourne but they hit a bank of fog just as they got to Karkarook Park in Heatherton, so that the birds seemed quiet and the wetlands ‘disappeared’. Luckily, a few Noisy Miners continued to chase a Brush-tailed Possum through the gums (did the possum think it was still night-time?) and Pied Currawongs called eerily from the gloom – so they at least had something to peer for! Eventually the mistiness cleared and they found six species of duck, a busy flock of Red-browed Finches acrobatically collecting grass-seed, a party of Superb Fairy-wrens including young males in their sombre winter colours and blue tails, and a Little Wattlebird (uncommon at Karkarook). The wren’s winter plumage change and the differentiation of Little and Red Wattlebirds made good talking-points for beginning birders, and the total of 33 species for the morning sent them home with lots of ‘homework’ to do. The following photographs were taken by Sue Wilson – a member of this group. I thank Pat and Sue for their contributions.

On Tuesday, 1 August Gay Gallagher addressed the ladies of the Bulleen Baptist Pathways Church. About 50 ladies attended to hear her speak about attracting birds to their gardens. Great interest was shown and many questions followed. I thank Gay for standing in for me on this occasion.

On Thursday, 3 August Sally Heeps attended Lauriston Girls School in Armidale. She spoke to the Grade one girls about which birds they may see in their backyards. The chosen birds were those featured on the Victorian Birds in Backyards poster. The girls got very excited when they saw one that they recognised. Thanks Sally.

Karkarook Park in Cheltenham was the latest venue for the Hawthorn U3A’s monthly bird walk on Friday, 18 August. The day was very, very windy and cold and all birds were taking shelter (especially bush birds).  Eleven people attended and they saw 27 species.  The best birds were Hardheads, Caspian Tern and two Black-fronted Dotterel. A Black Swan was on a nest very close to the pedestrian bridge on the approach to the main lake – hope it survives people, push-chairs and dogs! Pat Bingham led this walk and the following photographs were taken by Hawthorn U3A member Sue Wilson. Thank you Pat and Sue.