We finally assembled after numbers of our group had encountered traffic jams at different stages of their drives. Bill Ramsay was leader and had carefully chosen the date to coincide with a low tide which allows people to walk across to the island on the stony causeway. Twenty-four started the day under cloudy and humid conditions. There was no wind and the light cloudy conditions were very good for seeing birds. Before we reached the causeway we noted numerous Black Swans and Silver Gulls. And then a Striated Fieldwren called from the coastal heath. Excellent views were achieved.

A couple of Black-faced Cuckoo-shrikes were also present nearby. At the start of the causeway we encountered a highlight of the walk – several Pacific Golden Plovers roosted and foraged at the water’s edge with the bonus of a couple of Ruddy Turnstones beside them. Other sightings included the more-expected Crested and Caspian Terns, Australian Pied Oystercatcher and Little Pied, Little Black and Pied Cormorants. At water’s edge we watched Red-necked Stints and Red-capped Plovers and quite a few people also added Sharp-tailed and Curlew Sandpipers. Both adult and immature Pacific Gulls were present, close to a few White-faced Herons and an occasional Great Egret. Ibises were only represented by Australian Whites and spoonbills by a few Royals. A group encountered Cape Barren Geese which then joined the list. A male White-fronted Chat flew over as we settled into lunch.

The afternoon walk saw the party separate into smaller groups as people found their comfortable afternoon speed. The advance party recorded Grey-tailed Tattlers which was a first for many. If measured by “lifers” the day was well rated as several people were smiling broadly as they realised they had seen three, four or even five new species. By bird call we had 44 species and we thanked Bill enthusiastically for introducing many to the location.

46 people attended the BirdLife Melbourne outing to Anglesea, commencing at 9am and a brisk but lovely winters day. The outing focussed on Anglesea Heath and Point Addis. 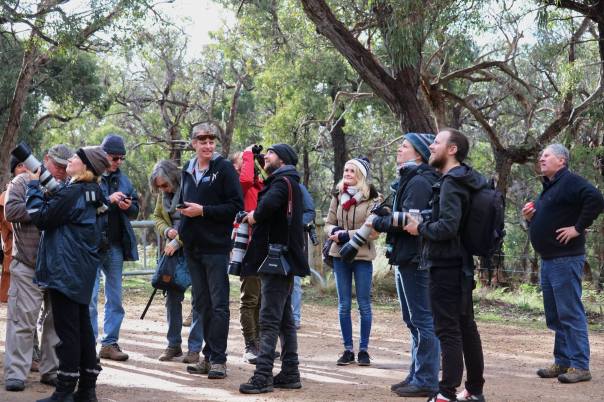 Us early risers had started birding before the start time and a few species had already been seen on arriving at the meeting place, mainly the Rufous Bristlebirds that frequent the car park at Point Addis.

Once everyone had turned up, which was a little difficult due to a marathon along Point Addis Road, we started with some sea watching which proved beneficial with both Shy and Black-browed Albatross cruising close to shore and a few distant Greater Crested Terns and Australasian Gannets. After at least 30 minutes we had a flyby by two Brown Skuas, only 200m off shore and gave great views for two or so minutes.

We left the carpark on a quick walk, but with nearly 2000 people around the area, the birds were scarce and the ambient noise was not conducive to good birding, so we decided too make a quick exit.

We headed to Ironbark Basin carpark, where we were greeted with New Holland and Crescent Honeyeaters, Musk and Rainbow Lorikeets and Red Wattlebirds. As we started on the loop track we picked up Fan-tailed Cuckoo, Golden Whistler, White-naped Honeyeater and both Striated and Brown Thornbills. The loop track provided us with some nice Fungi and ground covers and at the bottom of the loop we had two Bassian Thrushes and a beautiful Eastern Yellow Robin.

It was a good start, and as we continued to the next location in Purnell St in Anglesea we picked up Tawny-crowned Honeyeater, Striated Fieldwren, Grey Butcherbird and a beautiful party of Southern Emu-wren.

We continued along the paths alongside the water treatment plant, where we found a small group of Red-browed Finch, Welcome Swallows and a lone Masked Lapwing.

As it was nearing lunch we headed to Anglesea where we had lunch at the Lions Park on the Anglesea Foreshore Reserve. We picked up a few birds while at lunch with two Pacific Gulls, a Little Pied Cormorant and a raft of Eurasian Coots plus a lone Australasian Grebe. After lunch we headed back to Inverlochy Road where we went in search of the Chestnut-rumped Heathwren. As we walked the slippery paths up into the heath we got Buff-rumped Thornbills and heard at least two Chestnut-rumped Heathwrens but as these were in the valley, and the goat track that run down into the valley was slippery, I decided that it would be too risky for 46 people to traverse so decided to check out the local orchids instead which were covering the edges of the paths. We had a female Pink and Scarlet Robin along this road as well as a Rufous Bristlebird which was elusive to see but called beautifully.

We headed back to the low heath where we found another small party of Southern Emu-wrens and a pair of Australian King Parrots.

Our next locale was the Anglesea tip. It is a great spot to pick up Forest Raven, and on arriving there was a Forest Raven which flew over into the tip. After another 10 minutes or so another bird arrived, giving better views. Also of note was the local orchids that were in flower on Powerline Track, some stunning orchids will be flowering in this area shortly and would recommend a visit if you like birds and wildflowers!

Next stop was on Coalmine Road where we went in search of the Grey Goshawk but alas, no luck on this. We did see some nice birds but nothing we had not seen before, the highlight being a Bassian Thrush out in the open on a grassy field.

A great number of attendees to this outing and hopefully in the near future I will have another weekend outing.