The location was a first for the Melbourne Branch on Weekday Outing.

The forecast wasn’t promising, cold and cloudy, with showers in the afternoon. It was cold, 13°C, but fortunately, no rain and the wind was only noticed on the afternoon walk along the ‘ridge’ track.

The park area was originally a stone quarry, when it reached its end-by-date, the owner Mr Wilson, donated the land with a considerable sum of money to the City of Casey to establish a botanic park. Extensive landscaping has taken place since the 1990s by the City of Casey with two large lakes filling in the original quarry and planting is still continuing and in some places, rare Australian plants and trees eg: Woolamai Pine, making a Botanical Park.

On today’s outing we managed 30 bird species, a highlight being two Tawny Frogmouth, not previously recorded on a survey day taking the total to 88 species for the park. Cold conditions today reduced bird activity but a Spotted Gum in full flower was a favourite for Rainbow Lorikeets and Little and Red Wattlebirds. Further, in the sheltered northern area of the park a flock of Silvereyes were avoiding a sparring match between several Eastern Spinebills and a couple of New-Holland Honeyeaters. A couple Common Bronzewing were feeding under the trees.

Hoping for better weather the next time the Branch visits the park.

If you wish to visit the park, during the week is a good option as it is a very busy spot on the weekends since a Coffee Cafe was installed recently a short walk from the visitors Centre overlooking the Anniversary Lake.

Graeme Hosken, Leader for the day.

A very successful Birds in Schools Program has continued this month. Both Sally Heeps and Bill Ramsay have been to both Cornish College on 10 October and Wooranna Park Primary School on 17 October.  I thank them for their contributions to these programs.

On Sunday 13 October, Graeme Hosken led another successful bird walk around Wilson Botanic Park in Berwick organised by The Friends of Wilson Botanic Park.  The day was fine, cool and with no wind. Fourteen people attended the two hour walk with 21 species recorded.  Species numbers now average 25 over the 18 visits since 2004. The records now show 87 species found there over that period – not bad for a park now in a suburban environment. Thank you Graeme.

The U3A Hawthorn Birdwalk, led by Pat Bingham, was around Banyule Wetlands on Friday, 18 October. Thirteen participants recorded 35 species. Lots of breeding – including three frogmouth nests (one with one young), Eastern Swamphen with one young, Buff-banded Rail with three young, and countless Noisy Miner families.  On the swamp they also had a pair of Pink-eared Ducks (sadly driven out of the nest boxes this year by aggressive Silver Gulls) and a couple of Cattle Egret in partial breeding plumage.

The Blackburn Creeklands Spring Bird Survey was held early on Saturday morning, 19 October.  31 people (a mixture of adults and a good number of eagle-eyed children) split into two groups led by Ian Moodie and Pat Bingham. They headed off in opposite directions, returned for morning tea and combined their bird lists into one, with a total of 29 species.  Highlights were four Frogmouth nests (but no young seen), Mudlarks incubating, Grey Butcherbirds and Kookaburras feeding young, and both Chestnut Teal and Pacific Black Duck with broods of small ducklings on the creek.  We  also recorded Gang-Gang Cockatoos, Little and Long-billed Corellas, Galahs, King Parrots and both Eastern and Crimson Rosellas – a good number of which may compete for breeding in the many excellent tree hollows along the creek.

On Sunday 27 October 2019 we held our 21st Breakfast with the Birds at Banyule in partnership with the Banyule City Council.  This year we made a small charge to attend after more than half of the people booked in 2018 failed to turn up.  We had 80 people present out of the 96 who booked. These were split up into ten walking groups who walked the Banyule Flats and Warringal areas for two hours.  Upon their return the Council supplied a beautiful sit-down breakfast.  A bird call totalled 67 species with two new ones being added this year.  Gang-gang Cockatoos and a Leaden Flycatcher.  This makes a total of 126 species in Banyule on this day since records began in 2001 and 68 in the Warringal area since we started recording there in 2011.  I must thank the Banyule City Council for the wonderful spread of food, Jim Mead, their Environmental Sustainability Education Officer and his helpers (Alice, Micky and Rob in the kitchen) and John and Meg who helped with telescopes at the wetlands.  I must also thank my helpers Susan and Kevin Bailey, Peter Bennet, Pat Bingham, Alan Crawford, Pete Dynes, Lyn and Geoff Easton, Meg Houghton, Margaret Lo, Bill Ramsay and Sonja Ross.  Also thank you Daphne Hards who assisted with a telescope at the wetlands and Anthea Fleming for her information on the Warringal Conservation Group.  Another very successful day.  Thank you everyone.

Pat Bingham gave a talk to the East Burwood Probus on 2 October entitled ‘Birding with BirdLife’ – so it was both a bit of history of the formation of the organization and what it does, including advertisement of Bird Week activities. 80 people attended on the day.

On Friday 6 October, Sally Heeps spoke to the Greensborough Salvation Army Triple L Club (Laughter, Lunch and Leisure). Approximately 25 people attended on this day. Her PowerPoint presentation was about the birds of the area with special reference to the Doreen wetlands.

On Saturday 7 October, the Whitlesea Council planned a walk through the Quarry Hills Park, South Morang covering both the Hunters road and Granite Hills sections. This same walk was planned last year but cancelled because of the dangerous windy conditions. This year it was cancelled because of lack of numbers. I thank Sally Heeps for volunteering both years to lead the walks.

A Kinglake West Birdwalk was held on Sunday 8 October. This was the seventh annual birdwalk since the 2009 bushfires which burnt much of this property. Strong winds made it very difficult to hear or see birds this year. I thank Graeme Hosken and Peter Dynes for leading the bird walk this year. Eastern Whipbird was added to the list this year. The total species seen on the property on survey days is now 66.

Janet Hand made a trip to Kilmore to set up an information stall on Saturday 14 October, at the APS Mitchell Plant Expo and Plant sale. The weather was kind and over 200 people attended. Country people certainly are very interested in their gardens and the birds that live in them. It made for some very interesting discussions.

On Sunday 15 October, Graeme Hosken led a Spring Bird Walk at Wilson Botanic Park in Berwick. This was a Breakfast with the Birds event starting at 8am. Although the attendance number was low Graeme tells me the supplied breakfast was lovely. The group saw 24 species and added a Yellow-faced Honeyeater to the Park’s list.

About 40 ladies attended a PowerPoint presentation on Monday 16 October, for the Templestowe Ladies Probus Club. Janet Hand gave this presentation about the ‘Birds found in Manningham.’

On Friday 20 October, Pat Bingham had the U3A Deepdene walk at Jells Park; 20 people, 40 species and a good time was had by all as the Freckled Ducks (two females) sailed past; a pair of Sacred Kingfishers called and were seen briefly; the breeding White Ibis, Cormorants (Great and Little Black) and Reed-Warblers were cacophonous. Attached photos, by Sue Wilson, are fun, especially the Wood Duck with attitude – ‘What a big breast I’ve got!’.

The next day, October 21, Ian Moodie and Pat Bingham led the Spring Bird Survey at Blackburn Lake Creeklands. They had about 25 people and 21 species. Lots of breeding – including Chestnut Teal with ducklings, Magpie-larks building a mud nest, Grey Butcherbird, Kookaburras and White-browed Scrubwrens feeding young, and three Tawny Frogmouths on nests but no sign of young on these nests yet.

Our 19th Annual Breakfast with the Birds at Banyule was held on Sunday 22 October, 2017. With 116 people enrolled we were ready with our leaders at 7.30am. As light showers passed Janet Hand sent off groups of eight with each leader. Towards the end it was obvious that many of those who had booked failed to attend. I thank my leaders on the morning – Susan Bailey, Pat Bingham, Emma Bond, Alan Crawford, Peter Dynes, Lyn Easton, Anthea Fleming, Robert Grovenor, Sally Heeps, Meg Houghton, Owen Lishmund, Richard Loyn, Ian Muir, Geoff Russell, Scot Sharman. Thanks also to Daphne Hards, Bill Ramsay and Sam (Banyule Council employee) for their assistance with the telescopes at the wetlands. Special thanks to Jim Mead, his assistants and the Banyule City Council for a beautiful sit down breakfast. 73 species were seen in Banyule and 37 in the Warringal area. Three Warringal species were not seen in Banyule so we had a grand total of 76 species for the morning. A dozen species were observed breeding in Banyule and two in Warringal. Eastern Whipbird was added to the Banyule list this year. Our list now totals 123 species for this one day in October. Well done everyone. 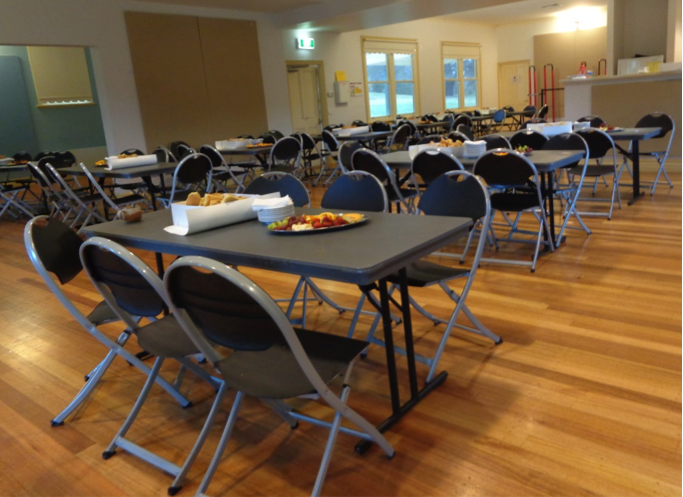 My thanks to the many people who have helped with these activities.